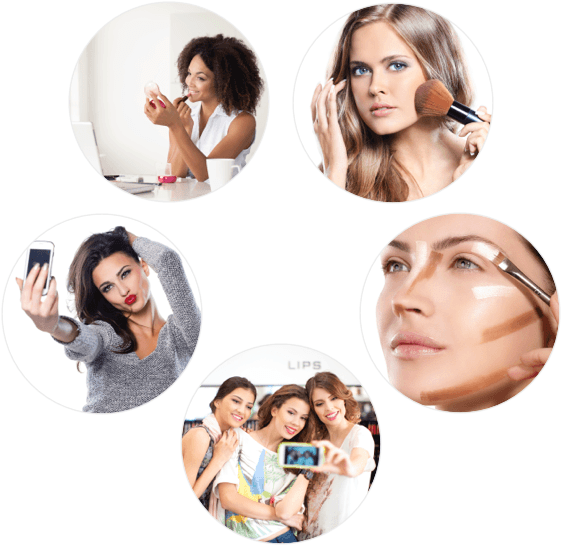 With so many different influencers and gurus to follow, we narrowed it down to our top 5 favorites! These beauty gurus came from humble beginnings and were able to cultivate and create a following in the last 7 years. Did your favorite make the list? If not, comment down below and share their instagram and youtube with us!

At Chic Studios, our Digital Beauty Influencer course takes some of these influencers’ aspects to help you define your brand and elevate your social presence. We teach you how to build your social media as a mini portfolio for your clients and followers. Learn more at the link.

Read more, take notes, and hopefully we’ll be seeing your name as a “must-follow” beauty influencer! 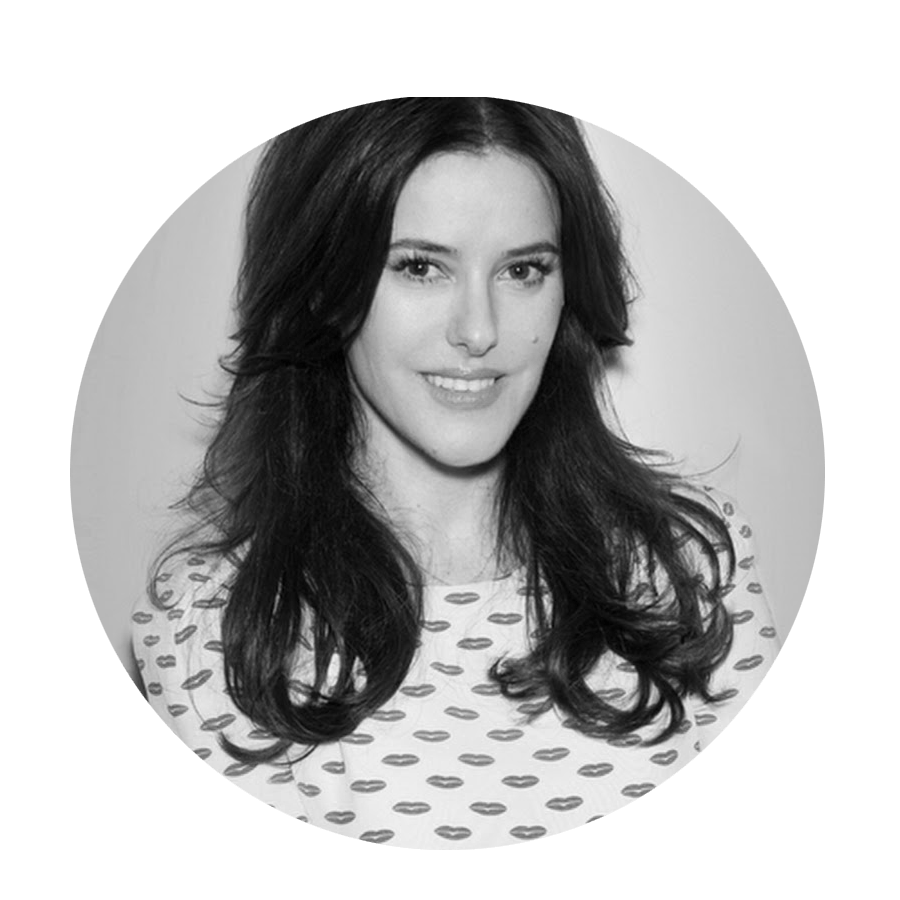 Lisa Eldridge is one of the most experienced and respected makeup artists in the international fashion and beauty industry. Born in 1974, she was raised in New Zealand and Liverpool, England where she discovered makeup at the age of six years old and then received a book of theatrical makeup for her 13th birthday.  She had her first big break when she was booked by ELLE Magazine to work with supermodel Cindy Crawford. Today, she is a widely renowned pro make-up artist, creative director, and author with a huge online presence! At Chic Studios, we keep several of her inspiring books on hand for students in our classroom. Her youtube channel (which has a 1.7 million subscribers), not only features videos of herself, but makeup looks on women of various skin tones and ages. Eldridge also maintains a high editorial profile as the current creative director for Lancôme, working across product development, advertising campaigns and digital strategy. 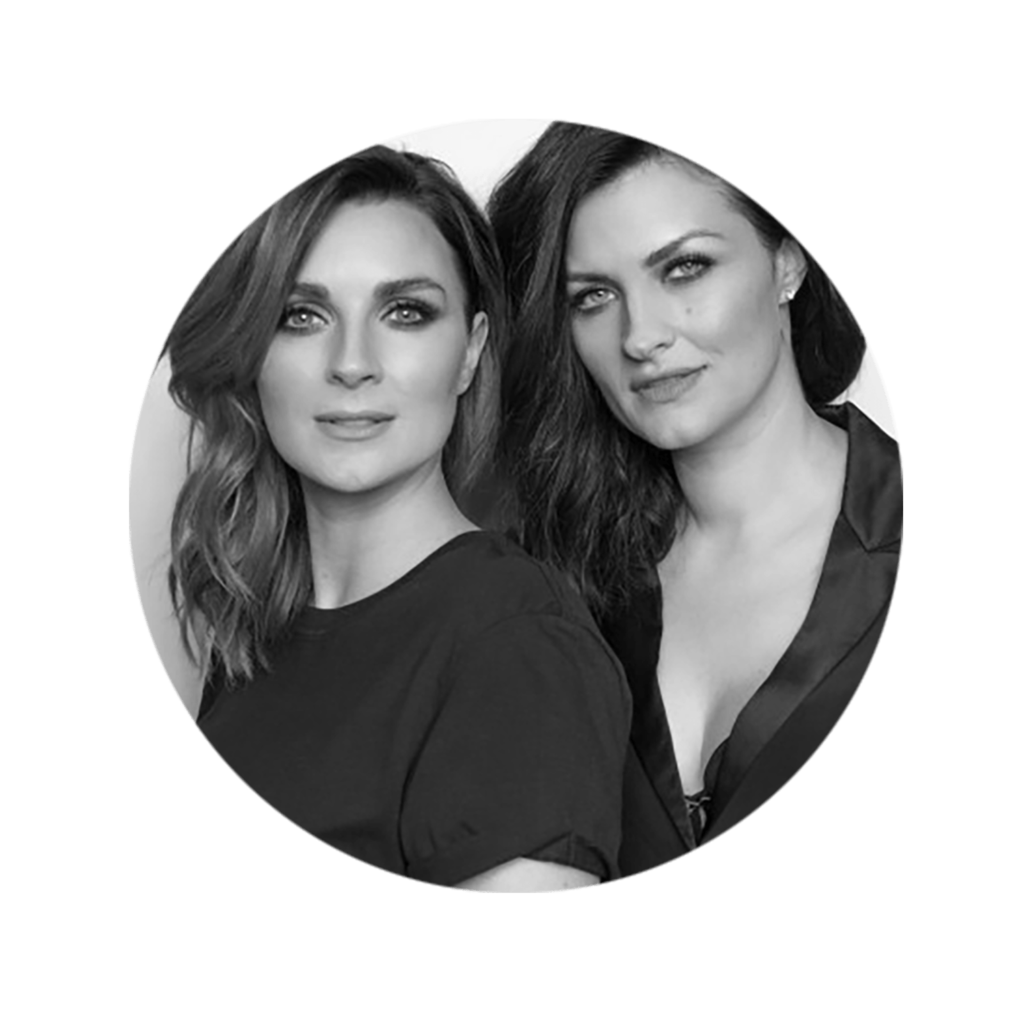 When it came to choosing a career path, Sam and Nic Chapman were destined for makeup artistry. Growing up in London, their aunt was a top makeup artist working for clients like David Bowie and Princess Diana. Their mother was also interested in makeup and would always try out the latest trends and create innovative looks. After working with amazing brands like MAC, Estee Lauder, and Chanel– the sisters built a reputation as respectable makeup artists in the industry. The first Pixiwoo video was created in 2008 when Sam was pregnant and her friend wanted to learn how to create a smokey eye. Immediately, people everywhere began to find Sam’s video and request more since Youtube was still growing at this time. The two sisters began to collaborate and create videos about makeup hauls, product reviews, celebrity inspired and runway looks. In 2011, the idea of Real Techniques was launched and has taken off in the US, UK, and around the world. Real Techniques brushes are one the favorites at Chic Studios and exclusively found in students’ makeup kits. Sam and Nic continue to grow as top makeup artists, writing columns for national magazines and newspapers, appearing on major network television as beauty experts, and editing their own digital magazine. 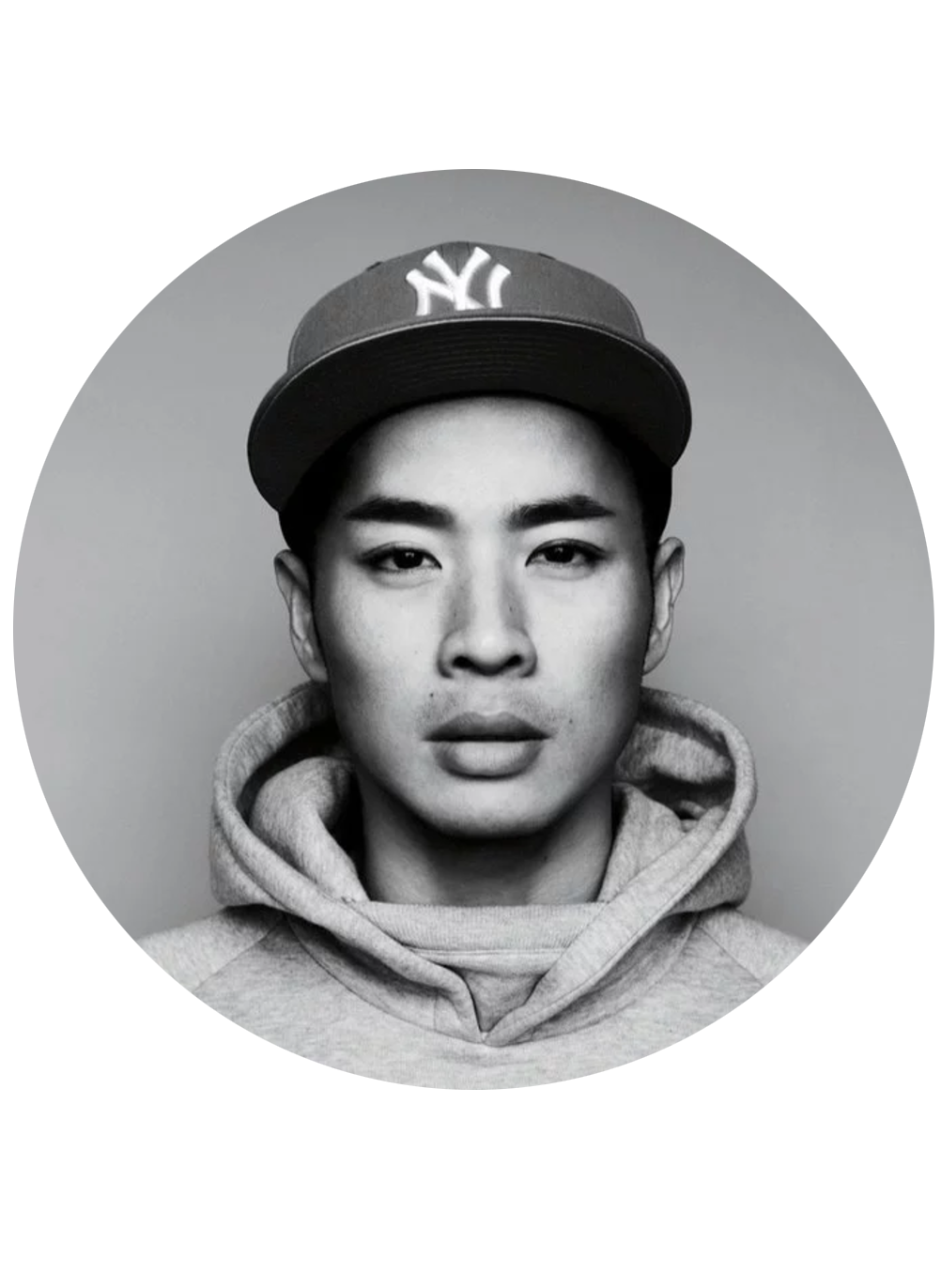 Nicknamed Hung Van Glow, his style of makeup has always been about skin and beauty. Hung Vanngo started his career in Canada and never stopped rising to the top. Our Director, Amy Nicole once worked on a makeup project in Canada before starting Chic Studios.  Vanngo rarely shares details of his personal story, preferring instead to let his work do the talking. His creativity was inspired at a young age where he loved to sketch and paint. His devotion to art helped him develop a refined hand and keen eye for color and composition. Today, he’s working as a celebrity makeup artist for Hollywood’s elite like Selena Gomez and Kate Bosworth. He even shares his techniques with 700k followers on Instagram where he pushes the idea of natural and pure skin rather than an airbrushed finish. We can’t wait to see more of his latest endeavours! 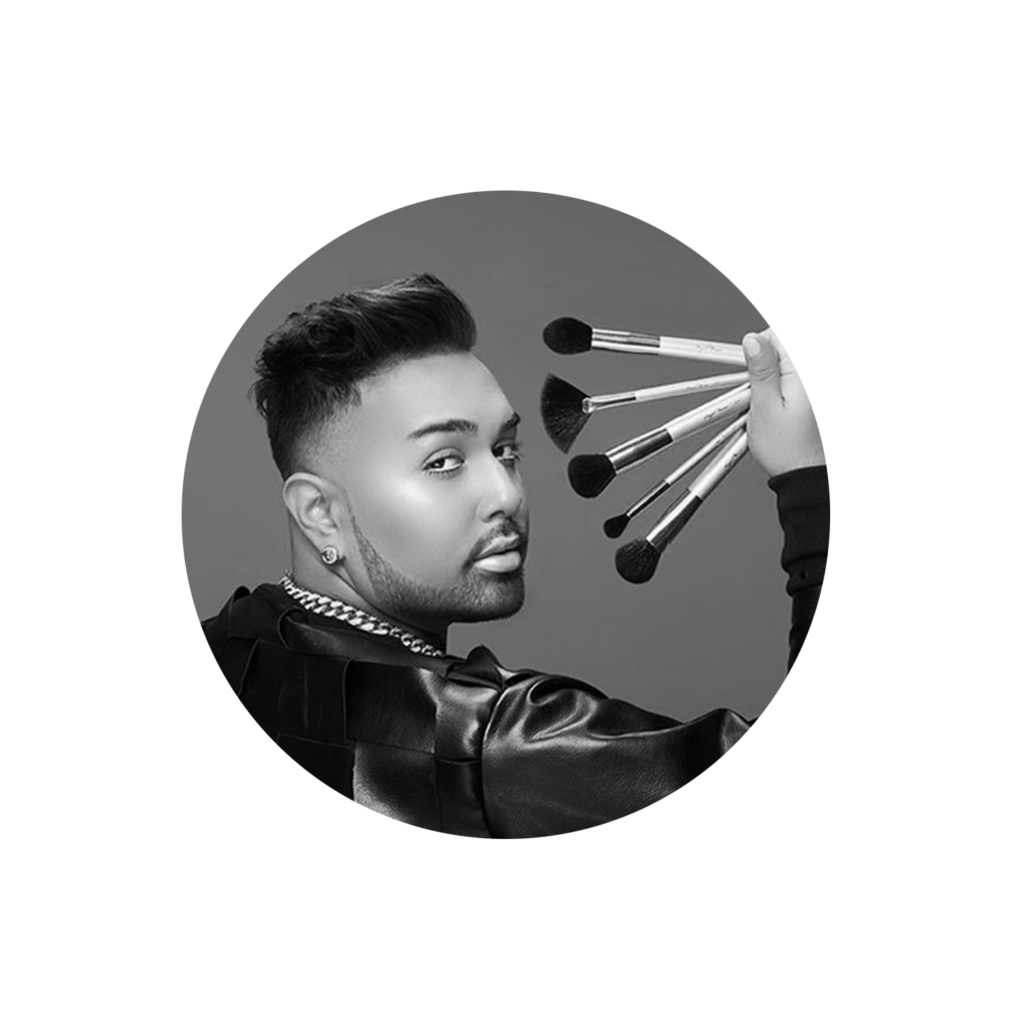 Angel Merino a.k.a Mac Daddyy is a self taught makeup artist who made a big splash on Instagram. He became interested in pursuing a career in the beauty industry at a very young age following his role as a dance instructor at local dance studios. Merino started in retail at MAC Cosmetics yet stayed on top with the latest technology. By doing so, he was on Instagram in the early stages and posting makeup looks while still working at MAC. His following was rapidly growing, so he quit his job to focus solely on Instagram. He currently has 1.3 million followers on Instagram and is CEO of his own cosmetic brand, Artist Couture. Along with that, he travels around the world teaching master classes and being featured as a keynote speaker at the biggest makeup conventions and expos. Chic Studios was honored to have him come to an event at our LA location for our graduates and students. As one of most popular beauty influencers, he uses his voice to advocate rights for the Latino and LGBTQ+ community and inspires his followers to “hustle and glow.” 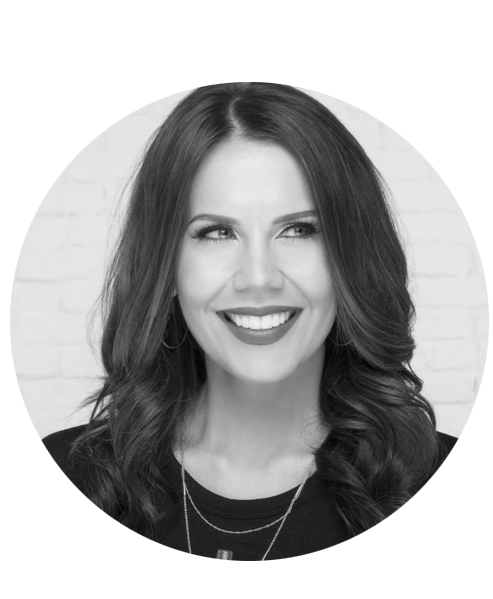 If you’re regularly on Youtube, you will be very familiar with Tati Westbrook aka GlamLifeGuru. With 3.2 million subscribers, she creates daily videos on monthly favorites, makeup hits and misses, as well as new drugstore product reviews. Before trying her hands at Youtube, she was an image consultant and a Hollywood makeup artist/stylist. The beginning stages of her channel were to teach women about makeup and provide beauty tips, tutorials and advice. As her channel grew so did her following, and she gave up her full time job to focus on creating videos. She reviews products by testing their claims; every makeup product that she tries must have her stamp of approval. If she doesn’t like something, she’ll let you know with her unbiased opinion, which we love about her! At Chic Studios we tell our students the same– keep it real. She showcases products with various price points: her WTF and OMG videos compare high-end products with the local drugstore ones, showing plus points of both products. She earned the runner-up award for ‘Allure Beauty Blogger of the Year’ and was even named Women’s Wear Daily YouTube Breakout Beauty Star. Westbrook is frequently featured in the world’s leading editorial magazines like Glamour, Allure, and Cosmopolitan.

5 Reasons Why Being a Certified Makeup Artist Matters

Through the scope of social media, it seems like makeup artists are living the most glamorous lives right now. They’re given opportunities to work on the faces of A-list celebrities like Rihanna and Chrissy Teigen, travel the world, and be backstage at high fashion runway shows every season. However, there’s so much more to it than living a lavish life! The journey to becoming a professional MUA is not as effortless as it looks on Instagram. The artists that we follow and teach about at our LA makeup school have gone through years of training as well as working hard to achieve their level of expertise. Through the years of tirelessly perfecting their craft, there are so many amazing benefits as to why being a certified makeup artist matter!

At our LA makeup school, we promise professional certification in 4-5 weeks! Our classes are intensive, hands-on, and you’ll feel like you’ve worked for a decade with the number of rotations we do a week. Our instructors are amazing artists who are still working in the industry so they’re able to touch on trends and give their own personal experience working on bridal clients, on-set, and even backstage at New York Fashion Week. We teach people of various skill levels and the end result is always the same: we’re able to take what you know (and what you may not know) and mold you into an amazing certified makeup artist.

Here are some of the reasons why being a certified makeup artist matters in Los Angeles:

Essential Skills of a Makeup Artist in Los Angeles

As a makeup school in Los Angeles, we get so many questions about people not only wondering if they’re too old to take a course or if they have no idea what they’re doing in makeup. We quickly dispell any negative connotation they have about the beauty industry and let them know that age is nothing but a number, it’s all about the type of skills that you can bring to the table. During our Professional Makeup Course, we go over certain skills that every makeup artist should master if they want to succeed in the industry. It could range from pushing yourself to take a look to the next level, timing, or communication.

In the fast-paced and growing beauty industry in Los Angeles, you need to be able to outshine the competition. You may say you already have the skills, but it won’t hurt to double check what you may be missing. There are so many essential skills of a makeup artist needed in Los Angeles, but here are a few! 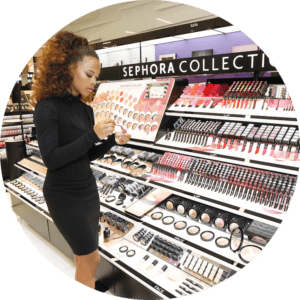 Beauty department stores are either a saving grace or living nightmare for makeup addicts. Once you step into these stores, you’re immediately taken into an overwhelming experience where you’re surrounded by beauty products (hair, makeup, skincare, etc) ranging from smaller brands to high-end ones. It just feels more exclusive and luxurious compared to your usual drugstore. At Chic Studios, makeup school in LA, we’re always heavily influenced and inspired by the beauty industry. The following cosmetic retailers have completely transformed the beauty industry but where did they get their start? It’s time for a history lesson! Get to know the story and history of our favorite beauty department stores in Los Angeles and some great rewards and discounts you can receive when shopping there after becoming a Chic Studios graduate!