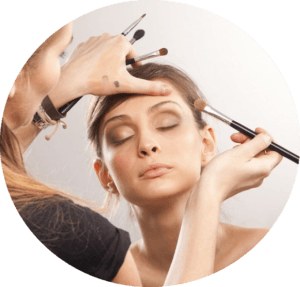 When you’re watching a movie or tv show, you’re not really considering the work of a makeup artist. There are various elements when it comes to making a film or tv show believable, but one of the most important elements in making the characters look realistic, whether they’re a crime victim, a monster/alien, or turning a young person into someone older. When it comes to TV and film, makeup artists as absolutely essential since they can make the audience believe that what they’re seeing on the screen in real. If viewers don’t believe or buy into what they’re watching, they’ll lose interest more quickly. The Los Angeles film and TV industry is a haven for makeup artists and crucial for their career and role in television and movies.

In our LA makeup school, we educate more on the beauty side of the industry. However, we do offer an add-on program where we teach the elements of working on a tv and movie set, along with how to use the items in your kit to create flaw-free skin perfect for HD TV and how to create bruises and fine lines. In our TV + Music Video Add-on class, our students learn how to work with celebrity clients on a production set and what type of makeup is necessary for a talk show appearance. 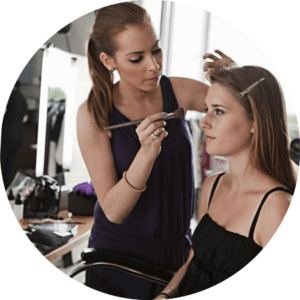 Working on a television and film set

Makeup artists that work in television and film help communicate the personality of all characters to the viewer. They use makeup as a way to improve, enhance, or alter the appearance of the actors/actresses. If a character is supposed to be involved in a fight, they have to be able to create different abrasions like a black eye or bloody wound. Not only do they do research on the characters, but they work closely with the costume designers and production hairstylists so that they can coordinate colors and style. They don’t just show up on the day of the shoot, professional artists will spend a good amount of time researching and designing the makeup that is required for production.This could mean using elaborate makeup and wigs for costume dramas, horror films or sci-fi movies or using materials to alter the shape of a face or create realistic scars. One of the most important and impressive skills that a TV and film artist can do is be able to recreate the makeup so that the character’s appearance is consistent despite if filming was done out-of-sequence. Remember to always take pictures of the actors after hair and makeup have been completed. These pictures will serve as a reference and recording of the look. In the event that you have to recreate the makeup at a later date (reshoots), you can use these images as a reference which is called continuity.

There are three different jobs in the makeup department. The key makeup artist is in charge of the department and responsible for designing the overall look for each actor/actress. Then they assign their assistants to recreate the looks. The assistant makeup artist may work on lesser characters or apply makeup to everyone in the cast. They are likely to be needed when there is a large number of characters to be done or a certain intricate look must be achieved in a smaller time. The last is a special FX makeup artist who is responsible for designing and creating special makeup effects using prosthetics, latex, and animatronics. One of our Chic Studios NYC makeup school graduates, Brie Puneky, is not only a certified makeup artist but she specializes in special effects makeup. She is currently working for NCIS and creates realistic wounds for the show’s victims. 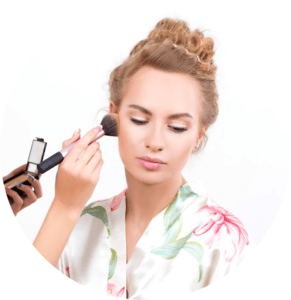 When it comes to TV appearances, makeup artists need to keep in mind many factors: the type of show they’re doing, HD cameras, and studio lighting. There are endless amounts of tv personalities on air and each artist should be versed in getting to know them and their makeup preferences. For newscasters, they typically wear lowkey makeup that does not distract from the broadcast. Reality shows can keep a makeup artist busy as there are so many filming situations like interviews in a green room, filming on and off location, and personal outings. And then for talk shows, if you’re working on a celebrity client, the makeup will depend on the time in which the show is set to appear and the actual client themselves. For a daytime show, a client may not want a bold red lip which would be too edgy but for a late-night show, they’d opt more for an evening look.

For most tv stations, they offer high-definition which is a resolution that is substantially higher than the standard definition. High-definition exposes any crease, wrinkle or blemish, so makeup should be sheer enough to allow natural-like skin but still hide uneven skin texture and flaws. Products, like Makeup Forever Ultra HD foundation, are great for high-quality television since the ingredients in the makeup contain silicon and are light reflective. We suggest avoiding anything with shimmers and glitters, as they could detract from the face and draw too much attention to a certain feature. Studio lighting is important to note as well when you’re on-set. For television, bright and hot lights are usually used so makeup should be fuller coverage and long-wearing. A film should closely mimic “real life” lighting so less coverage can be used however attention to detail is very important.

5 Reasons Why Being a Certified Makeup Artist Matters

Through the scope of social media, it seems like makeup artists are living the most glamorous lives right now. They’re given opportunities to work on the faces of A-list celebrities like Rihanna and Chrissy Teigen, travel the world, and be backstage at high fashion runway shows every season. However, there’s so much more to it than living a lavish life! The journey to becoming a professional MUA is not as effortless as it looks on Instagram. The artists that we follow and teach about at our LA makeup school have gone through years of training as well as working hard to achieve their level of expertise. Through the years of tirelessly perfecting their craft, there are so many amazing benefits as to why being a certified makeup artist matter!

At our LA makeup school, we promise professional certification in 4-5 weeks! Our classes are intensive, hands-on, and you’ll feel like you’ve worked for a decade with the number of rotations we do a week. Our instructors are amazing artists who are still working in the industry so they’re able to touch on trends and give their own personal experience working on bridal clients, on-set, and even backstage at New York Fashion Week. We teach people of various skill levels and the end result is always the same: we’re able to take what you know (and what you may not know) and mold you into an amazing certified makeup artist.

Here are some of the reasons why being a certified makeup artist matters in Los Angeles:

Remaining in the Pro Makeup Industry in Los Angeles (LA) 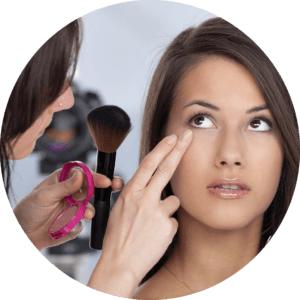 As soon as you graduate makeup school, you want to keep the momentum of your career going! One of the most straightforward goals you should have is to start booking clients. You can have the greatest skills as a makeup artist, but what is it worth if no one sees it? Booking clients is also a great way to sharpen and refine the skills that were taught to you as well. At our LA makeup school, we stress how important it is to make your mark and remain active in the pro makeup industry in Los Angeles! Here are some top tips that we teach our students… 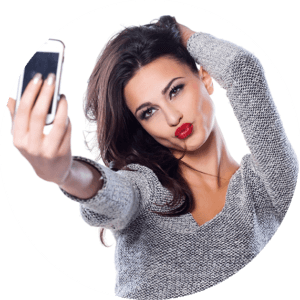 As a makeup artist, we understand the importance of showcasing your work in the best way possible. We also understand that social media has become a regular tool in this day and age. For business and freelance purposes, having social media will not only help your image through showcasing talent, but it will also represent your professionalism and credibility. Building online presence as a professional makeup artist is the best way to engage the online makeup community as well as have potential clients find you.